Time is on the side of China’s “Totalitarianism” & “Freedom Isn’t Free” — does the free west have what it takes to win the 21st Century? 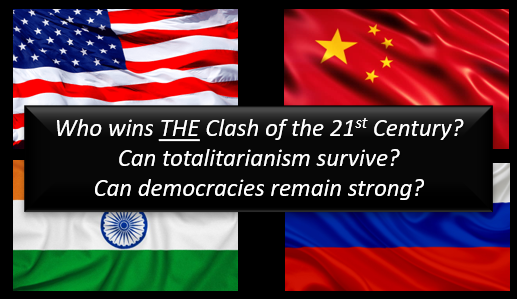 Recently we’ve discussed what a conflict in the South China Sea would look like between the US & China… and listeners write: “Listened to your discussion this morning.  One thing not touched on is the different Chinese perspective on time.  They take a much longer view on things then we do.  To them, Taiwan will ultimately return to the fold, similar to how they waited out the Brits to get Hong Kong back.  No need to invade.  Grant talked about the growing reunification movement in Taiwan.

They see the South China Sea as being in their historic sphere of influence analogous to how we view the Carib.  Again, only a matter of time.  They will continue to build up their Navy and develop access and relationships while our Navy and power projection capabilities continue to deteriorate.  We look at the 2030-35 timeframe as a potential collision date. I would bet the Chinese look towards the end of the century. So, I don’t think an armed conflict with China will happen in our lifetimes, even if we live to be 100.
The Spratleys and South China Sea are important for what may be under them. In addition to fertile fishing grounds, there is lots of speculation that there are large oil/gas reserves beneath the Spratelys.
Geography may be on our side, time may be on China’s.”  An ALL MARINE RADIO listener.